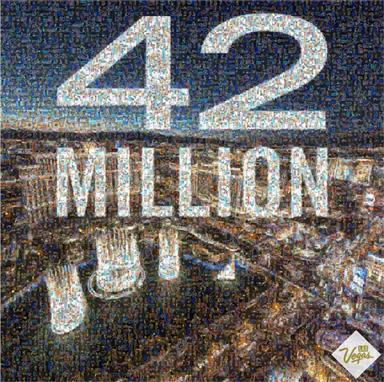 Las Vegas had more visitors in 2015 than ever, and yet less and less of those tourist dollars are being spent at the slots and tables in the casinos. This is actually a good thing.

Las Vegas recorded a record number of visitors in 2015. Visitation increased 2.5% over 2014 to a whopping 42.3 million tourists. And yet, gambling revenue has stayed almost stagnant. As gambling loses its luster, casino companies like MGM Resorts International (NYSE:MGM) and Las Vegas Sands(NYSE:LVS) are betting big on the new, non-gaming economy.

The non-gaming economy
Las Vegas brought in 1.2 million more tourists in 2015 than in 2014. Even then, gambling revenue grew only 0.7% during the same period with revenue actually falling 0.4% year-over-year on the Strip, helped somewhat by an increase in the smaller downtown area. So where are these tourists spending their money instead?

Las Vegas has been experiencing an economic shift in recent years toward an increasingly non-gaming market. Hotels, restaurants, and live entertainment revenue have been growing at faster rates than gambling. The most important trend is the rise in convention space usage. During 2015, convention attendance surged more than 13% in Las Vegas over 2014. Over 21,000 conventions and business meetings were held during the year, hosting nearly six million convention attendees.

MGM Resorts and Las Vegas Sands are two companies that are making a bet on this shift in spending — here’s how these two companies are positioning themselves for the future.