You’ll find all-night restaurants in towns across America. But in Las Vegas, where night and day blur into one, a 24/7 joint takes on a unique character 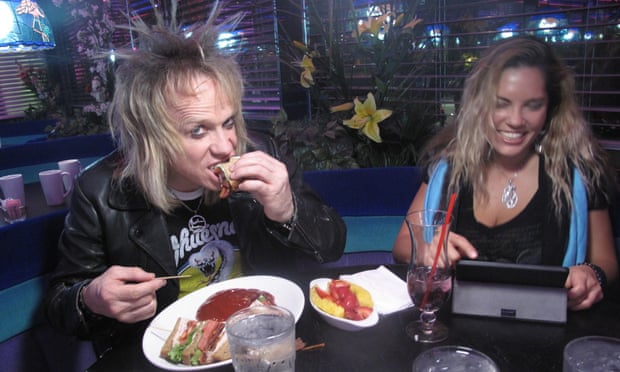 It’s just before 5am at the Peppermill Restaurant and Fireside Lounge in Las Vegas when David Cooper, his eyes still smudged with kohl, pushes open the door. He’s wearing a tight Whitesnake T-shirt under a leather jacket, and spikes of his blond hair are wilting after a long night. The sky over Las Vegas is still deep black, beyond the neon lights.

Cooper – a 46-year-old former sex club owner turned rock’n’roll singer – walks past a solitary bank of flashing slot machines. A cheery waitress greets him and ushers him into the Fireside Lounge.

The Peppermill, rather ingeniously, is bifurcated. Angels of night occupy the lounge; angels of day the restaurant. In the pre-dawn hours the lounge, with its low-lying sofas and hexagonal tables, is remarkably full. Around the fire slump the night owls, the early birds, the oblivion seekers.

Since it opened in 1972, the Peppermill has attracted winners, losers, winners who think they’re losing and losers convinced they’re on top. This morning, couples sit in varying stages of stupefaction. An older man slumps on his wife’s shoulder as she sips a glowing cocktail. At the bar, where keno machines are embedded on the counter, a few lonely men sit, underlit like horror villains. Cooper glances around and heads to the restaurant side.

You’ll find 24/7 restaurants in nearly every city and town in America. But in Las Vegas, where night and day blur into one, a 24/7 joint takes on a unique character. Without the circadian rhythms of sunrises and sunsets, time takes on an undulating shape, not unlike the outline of the Spring mountains in the distance. So it is at the Peppermill, where low-to-the-ground purple neon lights give the dining room a Space Odyssey feel, and two fake cherry trees remain in perpetual bloom mounted on the banquettes.

Add to this the gasoline that runs the place – the adrenaline, the addictive ka-ching of the slot machine arm, the melodic adhans of the blackjack dealer – and minutes, hours and days seem irrelevant markers.

“I feel like it’s still on here,” says Cooper, “Something is still happening and, well, there’s plenty of parking.”

Cooper is right, of course. It’s neverland in here.

Mary Randall, the manager of the graveyard shift, started at the Peppermill as a cocktail waitress after running away from a bad situation with a month-old son. Now her son is a cook, and Mary’s a manager with a 401K, benefits and a late-night smile. She says she knows enough to welcome guests with both a “Good morning … or good evening” when they walk into the door. One good indicator is, of course, their order. The menu is voluminous, as at thousands of diners like it, and the portions are notoriously generous.

A four-deep stack of pancakes arrives, overhanging the plate like a too-large duvet. A perfectly round ball of soft butter sits on top like a pouf pillow. Omelettes have 10 eggs. A fruit salad consists of a pineapple boat, oranges, bananas, watermelon, honeydew, grapes, kiwi, strawberry and pears. It comes with marshmallow sauce.

Many of the breakfast favorites come in skillets, perhaps a nod to the restaurant’s roots in Reno, Nevada, or perhaps just because no plate could hold the amalgam of sautéed peppers, onions, linguica sausage, mushrooms, tomatoes, hash browns, eggs and cheese that makes up Munch’s Breakfast, a favorite.