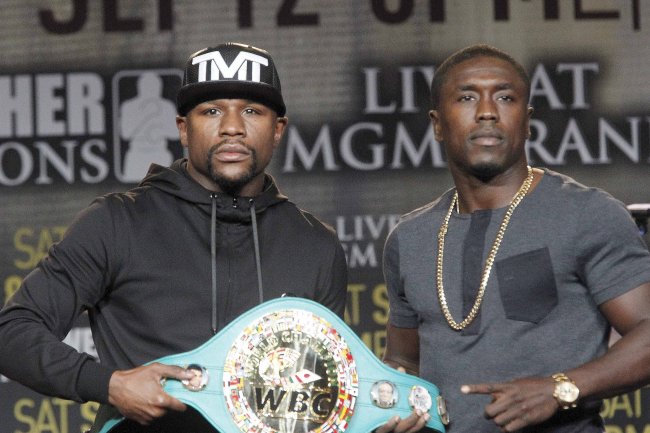 Floyd Mayweather finally gave boxing fans what they had been clamoring for throughout his career when he stepped into the ring with Manny Pacquiao. It’s safe to say that he chipped away at some of the goodwill he built with that decision when he selected Andre Berto for his encore.

Mayweather (48-0, 26 KO) will defend his welterweight world titles against Berto (30-3, 23 KO) Sept. 12 at the MGM Grand in Las Vegas, but it certainly lacks the pre-fight drama we saw before the Pac-Man showdown.

This fight is the last of a six-bout deal Money signed with Showtime/CBS and represents an opportunity to tie the 49-0 career record of heavyweight champion Rocky Marciano.

However, rather than squaring off with someone like Keith Thurman, Amir Khan or even Tim Bradley, the champion elected to face a fighter who never lived up to his promise because of injuries.

Chris Mannix of Sports Illustrated was certainly disappointed with the decision:

But we, like so many of you, are exasperated. Mayweather is a living legend. He’s not the best of all time, but he is somewhere on the list, a rare talent we may not see the likes of again for generations. But he steadfastly refuses to properly show it. Personally, I think Mayweather destroys Thurman. I think he outboxes Bradley. I think he flattens Khan. But since beating Oscar De La Hoya in 2007, Mayweather has bobbed and weaved away from top opponents he would have been heavily favored against and signed on to face ones with glaring flaws. He’s Pedro Martinez, if Pedro in the late ’90’s said to Boston, ‘You know what, I think I’m going to go pitch in the Independent League.’

As you can see, the betting lines reflect the talent discrepancy between the two fighters. Prop bets and lines are courtesy of Odds Shark as of Sunday at 5 p.m. ET.

Berto had plenty of promise coming off a 2004 Olympic appearance when he fought for Haiti, but shoulder injuries derailed his prime, and he is 3-3 in his last six fights. Frankly, he has little hope of stunning Mayweather and pulling off one of the biggest upsets in the history of the sport.

For one, Money’s speed and technical precision are too much for even the best boxers in the world to deal with throughout an entire fight. Mayweather consistently throws unblockable jabs at perfect angles and makes the necessary in-fight adjustments to avoid absorbing any major blows himself.

The combination of his hand and foot speed is simply unfair for most opponents, and Berto will be his next victim.

To Berto’s credit, he certainly isn’t lacking for confidence given his quotes, per Bob Velin of USA Today: “I’m just as fast, maybe even faster (than Mayweather). I don’t think Floyd’s fought anyone with speed probably since Zab Judah.”

While Berto may believe in his own speed, his best chance is probably with his powerful jab and uppercut ability. The only problem with that is Mayweather’s defense is unparalleled in today’s boxing world as well.

He dodged the majority of Pacquiao’s most devastating punches, and he will certainly do the same against Berto if the fight goes as expected.

Mayweather also has the reach advantage at 72 inches compared to Berto’s 68.5 inches, per BoxRec, so he should keep the challenger at bay with a combination of speed, jabs and defense. Ultimately, this isn’t a fair fight on paper and will play out accordingly.

It is a marquee event every time Mayweather steps inside the ring, while Berto hasn’t experienced this much attention before a fight throughout his entire professional career. Money will be more than comfortable in the spotlight, especially with the overwhelming talent advantage he boasts in this matchup, and will rack up his 49th victory in 49 tries.