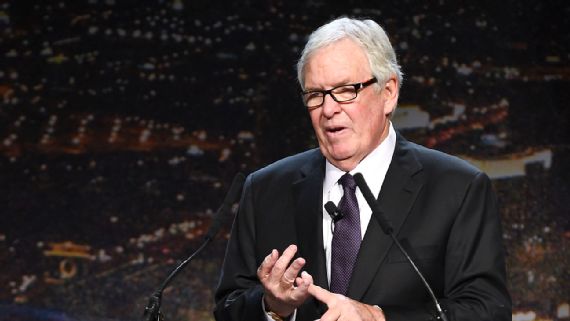 Bill Foley is the head of the Las Vegas group bidding to land an NHL expansion franchise. The group has already secured more than 13,200 season-ticket deposits for a potential team.

Las Vegas and Quebec City are moving on to the second of three phases in their bids to land NHL expansion franchises, the respective groups announced Wednesday.

Bill Foley, who heads the Las Vegas bid, issued a statement on his group’s website, “Vegas Wants Hockey,” that the league has invited it to advance. Quebecor, a Montreal-based communications giant, announced on its Twitter account that its Quebec City bid is moving forward.

The Las Vegas group has already secured more than 13,200 season-ticket deposits for a potential team. And there’s a multipurpose arena under construction near the Las Vegas Strip set to open next spring.

In Quebec City, the publicly funded, 18,259-seat Videotron Centre is set to open next month. It replaces the small and outdated Colisee Pepsi, which previously served as home to the NHL’s Nordiques, who relocated to Colorado to become the Avalanche in 1995. Quebecor manages and owns the naming rights to the new arena.

There is a third phase to the process, though it’s unclear when that will begin. Bids must also be approved by the NHL board of governors.

The NHL isn’t expected to expand until 2017 at the earliest. Commissioner Gary Bettman has proposed an expansion fee of $500 million. That’s a significant jump from the $80 million fee paid by the Columbus Blue Jackets and Minnesota Wild, when the NHL last expanded to 30 teams in 2000.

Out of 16 expansion applications, Las Vegas’ and Quebec City’s were the only ones accepted by the NHL last month.

As part of their applications, the two groups were required to submit a $10 million down payment, $2 million of which was nonrefundable.